The New NBA Jam Arcade Video Game is a 4 Player arcade game by Midway. This is a commercial quality arcade game that can be used in your business or home. The game allows up to four players to control members of of a basketball team of your choice. If any one player scores three consecutive baskets, he or she is considered "on fire", a fire animation accompanies each shot, the person's Turbo meter does not diminish, goal ending is never called, and his or her accuracy goes way up. This continues until a player on the opposite team scores a basket, or until the computer decides the hot streak has gone on too long.

This Game can be used on free play mode with the home door or add the coin door and the game will accept coins just like in the arcade. You can still have the game on free play mode if you order with the coin door. This is not a Refurbished Game, This is a new game built to order with New Cabinet, New Controls, New Cabinet Art, New 27" LCD Monitor  with original NBA Jam Arcade Board. All the Controls, LCD monitor, and Cabinet are all commercial quality.

There are 13 confirmed player codes:

I love this game!

I cannot get enough of NBA Jam! The game brings me back. I have had multiple friends come over and enjoy playing it as well. Each of them have said the same thing “damn that game is fun.”

I really enjoy beating the **** out of my friends.

Just wanted to drop a quick note and thank you for the excellent service and shipment. Received today and enjoying my Quarantine with NBA JAMS! God Bless Us ALL! Johnny

Great game !!! Delivered earlier than expected and in perfect condition 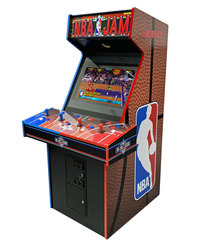