This is a Restored Asteroids Arcade Video Game, Not to be confused with a repaired, refurbished, shopped, shopped-out or used Asteroids Arcade Game for sale. This game has been restored from head to toe. The cabinet has been sanded, painted, and new sideart installed. The Marquee Light, Starter and Marquee (Sign at the top of the game that says Asteroids) has been replaced. The Monitor Plexi has also been replaced along with the Rock bezel (the graphic of rocks around the monitor). Asteroids Control panel overlay (the graphic around the buttons) has also been replaced. Asteroids start button bezel's have also been replaced along with upgraded new style arcade buttons so you will have more control and better reliabilty of the movment and fire buttons over the older 80 style arcade buttons. New Asteroids Door lock and coin mechs. The Coin Door and Control panel have been powder coated and rebuilt. The Power supply and transformer have been overhauled and upgraded for longer life. The Asteroids main computer (also called the mother board or PCB) have been upgraded for longer life. We have addressed all heat problems caused by old age in games like this, fixing and/or replacing connectors, solder joints, broken wires and other problems that cause heat and lead to more problems in older games. The Asteroids cabinet T-Molding and Cabinet Feet (leg levelers) have also been replaced. Last but not least, The Asteroids Monitor has also been removed serviced and restored to its orignal 80's luster and reinstalled.

As you can see no expense or time was spared in Restoring this Asteroids arcade game. So if you looking for a cheaper, worn out Asteroids game for your game room this is not for you. We have a lot time and money in this machine and it shows in every way. This is an Asteroids you can put in the nicest of game room's and be proud of it.

The original version of the game had a feature that allowed the player to hide their ship in the score field indefinitely without being hit by flying asteroids.

The most famous play tactic for Asteroids is the "hunting" strategy. The player destroys all asteroids except for one that almost clears the playfield and makes it relatively safe. This allows the player to hunt for alien saucers without worrying about being smashed by a lot of flying debris.

Our One Year Limited Warranty, covers telephone diagnosis and repair, Including Shipping of the replacement Parts for one year 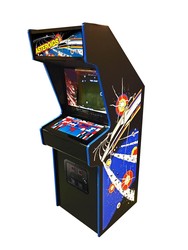 The game arrived On Time, and in perfect condition. The few questions I had were answered quickly and professionally. I would recommend Gameroom Goodies to anyone! Thanks for the wonderful customer service! Bob

We love our restored astroids arcade game and Pac-Man cocktail table game. everything arrived in perfect condition and on the day promised. All questions were answered promptly. Highly recommend!

We love our restored astroids arcade game and Pac-Man cocktail table game. everything arrived in perfect condition and on the day promised. All questions were answered promptly. Highly recommend!