Led Zeppelin was an English rock band formed in London in 1968. They are considered one of the best-selling music artists of all time. To-date, there have been only 7 artists that have sold over 250 million albums and Led Zeppelin is one of them. They were inducted into the Rock and Roll Hall of Fame in 1995.The Premium and LE model will debut Stern Pinball’s Expression Lighting System™ which has 96 intelligent RGB LEDs that enables full color spectrum control. These lights are positioned in pockets cut into the cabinet interior to provide a full playfield illumination while also appearing beautifully flush with the cabinet walls. Each of the 10 songs are programed different to sync with the Expression Lighting System™, so it’s a different experience with every ball!

The Premium and LE model will also debut a brand new mech never introduced to a pinball machine called the Electric Magic™ Toy. This device raises from beneath the playfield to reveal a pass-through chamber with an optical spinner. There are rubber posts on both sides of the chamber and to go through cleanly up the middle is very satisfying and very addicting. Hitting that shot multiple times continues to charge the optical spinner, and once fully charged the insert with lights and the magnet under the device will activate to catch and hold the ball lowering it beneath the stage (playfield) for Electric Magic Multi-ball

There are quite a few differences between the two models. Here are features on the PREM/LE only:

Led Zeppelin Songs in the Pinball:

Led Zeppelin Limited Edition Pinball Machine price includes Free curbside Shipping. The Freight company will bring the machine to your home but it will be your responsibility to get the Arcade Game into your home. The minimum door opening size you need is 28", So this game will fit through any standard door.

For Commercial/business use, coin operated or free play use of this product limits your Warranty to 90 Days 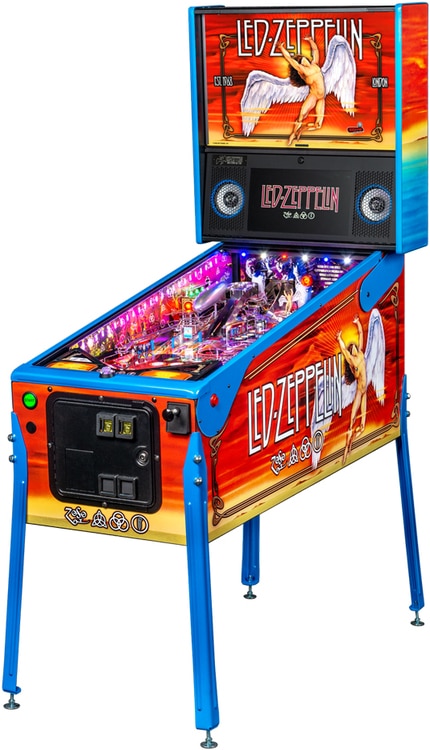 Good machine. A little spendy for the name verses play. Fun but not as fun to play as POTC or Monster Bash. Id rate it in the area of 10-15 on the 100 scale